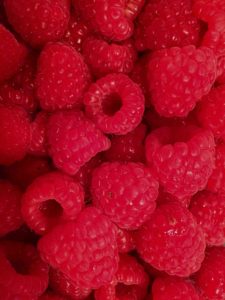 I relish poets that turn things upside down and sideways, make me laugh, and reveal truth all at the same time. Ellie Schoenfeld from Duluth MN is one of those poets. In addition to her other poetry I recommend checking out her Barbie poems, which are, like the piece below, wry social commentary.

I’ve been eager to share this prose poem here ever since it first delighted me. I love the droll images it evokes and the way it lures us into the sensuous.

And how can I resist a poem in which God wears an aqua tutu and raspberries are the hero? I love raspberries, my Manna from Heaven.

I’d love to hear what you think.

In the dream I am a journalist who has landed an interview with God and God is a wrinkly old man wearing an aqua tutu. He can tell that I am a little surprised by His appearance, says He picked the god as a human male thing to match my upbringing, and the tutu (which I don’t remember hearing anything about while  growing up) well, He confesses that it has always surprised Him that  humans, who have free will and can wear anything they like, don’t all just gravitate to ballet clothes. Those lushly colored, diaphanous fabrics which lend themselves to  twirling – an activity God suggests we spend more time in –are one of the better things we have ever come up with. We discuss fabric for a while and then I ask Him if humans are really the most evolved of the species. He has a hearty belly laugh, tells me how much we crack Him up, pulls Himself together and tells me no. Says the raspberries, for example, are light years ahead of us. Think about it –there they are with their berries that perfect shade of red, that pleasing texture, they offer up their sweet sensuous selves to the world, they spread joy, don’t argue, have flags, feel patriotic, or go to war. They just share their perfect selves and here God reminds me about the ones who were good enough to plant themselves right by where I park my earth-destroying car. They don’t hold this car against me, they know that humans are not smart enough to do anything else. I ask about the sparkly crown which is more like a tiara and He says, yes, that’s what it is because tiara is such a prettier word than crown, which implies kingdoms and that bad impulse to go to war whereas a shiny tiara just makes a man feel pretty. God laughs, says He thinks He was a crow in a past life and I think Wait! It’s me who thinks this crow thing about themselves to explain my attraction to shiny objects, so maybe this is one of those lesson dreams, maybe I’m starting to think of myself as God when I should clearly be trying to emulate a raspberry and when I wake up I eat my new role model for breakfast because I have always heard that you are what you eat.