Fish Out of Water

Several days ago, on a cool rainy afternoon up on the north shore of Lake Superior I sat at a cabin table, enjoying the music of the surf and doodling idly. At one point I looked at my drawing in surprise. When my drawing or painting looks  like a person or animal, I assume it represents some hidden part of myself, so imagine my chagrin when I saw this in my notebook: 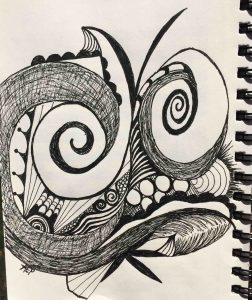 It looked to me like an angry fish, probably a bottom feeder. I had intended to fill the entire page with doodles, but as soon as I saw this creature I gave up that idea. I was almost afraid to mess with him because he seemed so cranky.

Irritated at how we’ve been trashing the waters of the world perhaps?

It makes him look a bit crazed, don’t you think?

Well, he certainly feels alive to me, with his anger and his stubbornness. I appreciate the intense energy of his unchecked, inflexible crankiness. I’m not sure he can be simply pushed away, denied, or changed by enlightened thinking.

I must say the longer I look at this fellow who has arisen from the depths, the more affection I feel for him. I don’t want to change him into something more agreeable; the pure energy of his being himself has a kind of beauty. I imagine that we all have a similar critter lurking in our depths, and it makes me laugh to envision a bunch of these surly fellows banging into each other trying to get their own way, shoving ineffectively to satisfy their needs without communicating with anyone else. (Come to think of it, sounds a lot like business and politics these days– he even looks a little like Trump to me.)

Well, one has to either laugh or cry.

Sometimes the only way to break through a crazy trance is to see how ridiculous it is.

Now that I’ve looked into his eyes for awhile, maybe I will recognize him when he surfaces. Then I can either go off by myself to let him fume and bully, or send him on his way with my love so that someone more cooperative can emerge.