A Bolt from the Beyond

now I can see the moon

The image of fiery destruction did not faze the group of six sitting around my dining room table.

For several years my husband and I have had four dear friends over for a turkey dinner potluck the Saturday of Thanksgiving weekend.  As we are finishing up our feast, after we’ve had time to chat with each other and discuss world events, I usually ask a question of the group. I like to pose a question that will elicit stories, questions such as “tell us what you harvested this year,” or “tell us a story of a time when—.”

This year I decided to let the Universe pose the question. So I chose to pull a card from the Major Arcana in the Gaian Tarot deck. The Major Arcana cards in every tarot deck express themes (and suggest questions) that are universal and are bound to occur at least once during a lifetime. 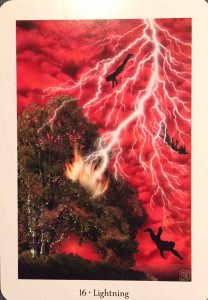 That afternoon when I pulled #16, Lightning, I took a deep breath. Amidst a background of fierce lighting bolts against red, trees flame up, lit by lightning in a thunderstorm, and three people fall from the air. The #16 card card disturbs most people, especially as The Tower in the traditional Rider-Waite deck, where the image shows people falling or leaping from a tower that’s been struck and destroyed by lightning.

This should be interesting, I thought, a bit nervously.

Later at our gathering I passed the card around and proposed some questions it suggested:

When were you forced by circumstances to change your life?

When has a sudden “bad,” unpleasant, or dreaded experience turned out to be fortunate in the end?

When have you been forced by circumstances to wise up or get real?

When has a bolt from the blue, of insight or circumstances, moved your life forward?

When you thought all was lost, what remained? 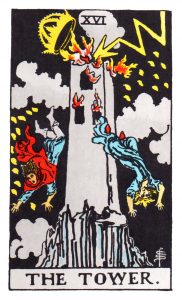 Well, this group was game. We told stories about how we met people crucial to our life while working a bad job or through suffering serious injuries in a car accident. One person told about how not finding a job in a tight market, then failing an important test, led to discovering her true vocation. Another spoke of how a particularly difficult experience of disillusionment at work finally forced a decision to change careers. We heard a story about a time when death and rebirth were woven together, and one about how experiencing deep despair finally led to opening to the wisdom and healing of an inner voice.

I sensed a palpable calm and peace in the room after we finished telling these stories. Most of them we had not heard before, despite our long friendship. Our respect for each other and for the wisdom of Life deepened.

I think we were calmed by the stories themselves, reminded that things aren’t always what they seem, and that sometimes what is unexpected and feels terrible can ultimately be a godsend.

Of course we knew that already. In our heads.

But to hear these stories, all at once, experienced by those we love all around the table, strengthened our knowing, made it more visceral.

The day I pulled that Lightning card, I couldn’t help but think of our country right now, too. In many ways our new administration is a bolt from the blue. In the weeks and months to come, I imagine much will be destroyed and dismantled. While the going may well be agonizing and dark at times, I trust that, just as in our stories, at least some of that destruction will clear the way for new life. May it be so!

When in your life have you been led, kicking and screaming, to a true blooming?