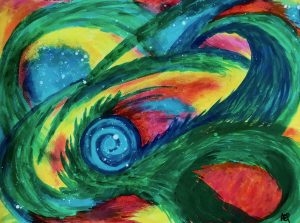 I had a humbling Aha! moment the other day. Humbling but also freeing.

Tom and I have been reading a series of young adult novels, The Lost Years of Merlin. The five book series, which imagine Merlin from about age 9 to adulthood, are fun, full of enchanted forests, haunted marshland, fanciful and magical creatures, and resourceful humans (including females!). Merlin, who has discovered his grandfather was a great wizard, knows he has special abilities (though he doesn’t know much about what they are) and that he is destined to be a wizard also. Yet he struggles with this, alternating between being too cocky about his powers (and then either losing them or misusing them in some way) and angrily declaring he has no powers and will never fulfill his destiny (poor me). Friends tell him how he demonstrates courage and heart, and magical beings declare he has more power than he knows. We the readers know that all this is true, but Merlin, in typical adolescent fashion, moodily brushes it all away.

While we were reading the third book, both Tom and I commented that we were getting bored with Merlin’s constant worry about his powers and whether he would fulfill his destiny. We hoped he would wise up soon.

The Aha! came the next day while swimming at the health club. With embarrassment I suddenly realized I DO THIS! For years now I have worried aloud about what I am “meant” to do in the world and discounted or minimized what I have done. I fretted that my offerings were “not enough,” because I could do more, or because they weren’t the “right” kind of offering, or because they won’t “change the world.” I have received and appreciated positive feedback from others, but often not fully taken it in.

I realized I must have been boring everyone with this for years. Feeding myself negative thoughts and wasting my energy. Acting like an insecure adolescent. 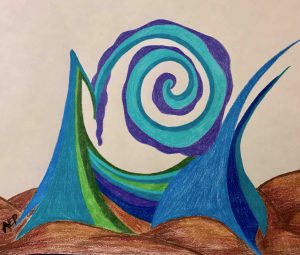 When we participated in Peggy Rubin’s Sacred Theater workshops years ago, she would admonish us, “Don’t bore the gods!” I realized I must have been boring the gods too, as well as disrespecting their creation (me) and my gifts and offerings (accomplished in collaboration with them).

All of a sudden I got it.

I’ve now taken to heart what I kept yelling at Merlin as I read:

Just do what you’re called to do and figure things out as you go!

Just be who you are; your powers will take care of themselves!

Have you ever come to deeply get something after seeing (or reading) someone else’s experience?

How do you keep from boring the gods?