Incredibly Out of Touch

Had an embarrassing “old and clueless” moment at the movies awhile back.

We loved Incredibles back in 2004 when we saw it with our teenaged kids, so we were eager to see Incredibles 2. The plan was supper and the movie.

The first red flag was when I looked up the show times. I was startled to see that we had five choices: in addition to standard and 3D, the film was in IMAX 2D, Dolby, and Prime. We didn’t know what most of them were, but since the only one we knew we wanted to avoid was 3D, we went off to dinner, figuring there would be plenty of showings to choose from when we were ready to watch.

Later, when we got to the theater the next show was in Dolby. Enhanced sound? Probably too loud, but ok.

Dolby was as expensive as 3D. And all the rest. Except standard. Sigh. Oh well, we’re here now.

Select your reserved seat. That was new at this theater. To us anyway.

Passing an expanded snack bar and an actual liquor bar—when did that happen?—we found our seats, large cushy recliners, and settled in.

(Ok, before I go on I have to say: we do go to movies, even theaters that have reclining seats and a full bar. But mostly to theaters with very basic amenities. Probably hadn’t been to this one in about a year.)

After a few minutes of an expected loud and frenetic pre-movie show, the previews began. As this was an animated kids movie, all the previews were for kids movies, all of them animated. All but one of them were epic adventures, with explosions, high speed chases, natural disasters, violent fights with monsters, and more explosions.

That’s when we realized what Dolby was all about—not just enhanced sound (BOOMING) which moved around the theater, but also extra vivid colors, and seats that shook with every explosion. 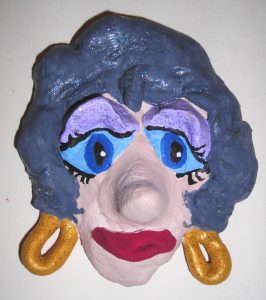 By the end of a half hour string of adventure trailers, in which our chairs vibrated constantly, our ears rang with sound and our eyes struggled to follow all the darting images, we were a bit disoriented with assaultive sensory overload.

Finally the movie began. More noise and chair vibrations. But at least we knew and liked the characters.

But then my chair moved backwards. Hmm… Is this part of Dolby too?

Then forwards again. This doesn’t seem related to the movie.

A few minutes later the chair began to recline and my feet left the floor. I looked over at Tom for his reaction. But his chair wasn’t moving.

Oh! The chairs must be adjustable and I must have touched something. Now I’m feeling like an idiot. But my hands are not on the armrests!

In the dark I couldn’t see controls for the chair, but I must have done something somehow. We both began to press things that might be the controls, but nothing happened. After doing this a few more times I gave up—I wanted to watch the movie, not fiddle with the chair—so I spent the rest of the movie somewhat reclined, my feet dangling slightly off the floor. (Feeling silly and completely clueless.)

When the credits rolled and the lights came up I could see the controls—pretty straightforward. No problem to glide upright and return my feet to the floor. Why had we had so much trouble before? (What we figure is we pressed each button more than once so they cancelled each other out.)

We left laughing sheepishly at ourselves but also feeling a bit battered. Battered from sensory overload. Disturbed at the level of frenetic activity and peril now in movies even for children. Disappointed that this new movie, though enjoyable, wasn’t as amusing or clever as the original.

And embarrassed to feel so out of touch (and slightly cranky) with the modern world.

Probably good we don’t have grandchildren.

(Have you had any clueless, out of touch moments lately?)