It’s amazing what you can get on Amazon. Recently, when I was in Lanesboro Minnesota visiting my friend, I learned that the nearby town of Peterson, population 200, had taken up a collection and ordered an 8 ½-foot gnome to honor their Norwegian heritage (and for fun and to drum up business I imagine).

Well, the gnome got lost somehow en route, so Amazon apologized and sent them another one. 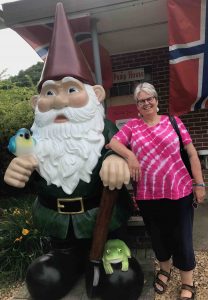 Eventually, the lost one showed up, leaving Peterson with two 8 ½-foot gnomes. (Apparently Amazon thought it was too much trouble to ship one of them back.)

Of course my friend and I had to drive to Peterson to see them. One gnome sits in Peterson’s city park and the other next to a sign welcoming visitors to the town. Turns out 8 ½ feet isn’t as large as you think (though still impressive). See photo.

If gnomes are not your thing, we later discovered that the company that made these gnomes also sells (among many other items):

An African elephant that is 8 feet tall and 12 feet long;

I cheer on any suburban homeowner who dares to add humor and eccentricity to their homestead.

Though I’m also a little disappointed. Of the hundreds of items made by this company, most of them are pretty standard issue (an amusing exception is a 6’ Bigfoot carrying, like a good daddy, three happy child-sized gnomes), just different sizes and unsurprising variations on customary themes. (Why are triceratops always charging?  Why do fairies always look like Barbie dolls with wings? Why does almost every garden frog, heron, angel, Buddha, look alike?)  Why aren’t there more odd creatures–a 10-foot hedgehog, say, or a plump, aging fairy, an enormous firefly, or a dragon with less ferocity and more personality? Lots of fantasy animals here, but none are truly eccentric.

Yet I suppose anything eccentric would get posted online, soon mass-produced, and eventually lose all eccentricity anyway.

Besides, aren’t all these statues really just a useless waste of natural resources, labor and money? Just more stuff?

Ok, probably so—silly, useless, wasteful. But the little girl in me still wants to play and dream, still chuckles imagining these huge creatures in odd places. An African elephant and a giraffe strolling beside a garden in Minnesota? An angry triceratops hurtling out from behind the garage?

Could you eat your grilled burgers under the gaze of a snarling dragon or a brachiosaurus? Maybe better stick to the smiling gnomes…

(By the way, these HUGE trolls are fun and a bit eccentric–though you probably don’t want to eat with them, either.)