A Question to Ponder on Earth Day in a Pandemic 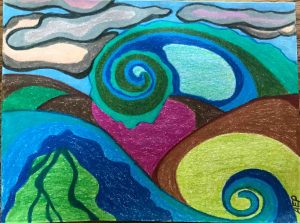 What did it say?” God asked.

Well, first I should describe the day,”

Mrs. God replied. “It reminded me of creation,

the air thin, and every atom

“I think that’s because there was no past.”

“Exactly. Nothing had accumulated.

No old shoes or out of date bifocals in a tangle.

In those times we were still discussing

whether the chicken should lay the egg, or

whether the egg would need to hatch first, until

you thought of simultaneity.

God smiled, the most fluid of all his expressions.

walking through the city. Sometimes they passed

through the deep purple shadows of tall buildings.

You could see them shiver, and the youngest

clung to their mothers. Then they emerged

into the light, and their arms opened

walked, silent, happy to be among their kind,

and others carried signs on sticks.”

“Why? What was this march about?”

“Well oddly enough, it was about

the value of the homo sapiens’ ability to reason,

and honestly, I felt validated.

We spent a lot of time working on that.”

“We were too good to them.”

who had a child at her side and another

that read: “What if Heaven and Earth

were the same place?”

“She phrased it as a question?” he asked,