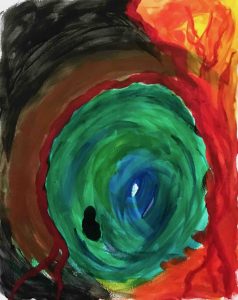 Fifty years ago this week my mom nearly died in a terrorist bombing in St. Paul. Just weeks before my senior year in high school.

Mom and Dad had just finished shopping at Dayton’s department store. Mom popped into the restroom on the way out. She was standing at the sink combing her hair when a bomb in the wastebasket exploded, destroying the restroom and changing her life forever. She was 47.

A larger bomb, intended to kill policemen and first responders, was found in time and deactivated.

1970 was a volatile time in the U.S. There were mass protests against the Viet Nam war. That spring protesting students were shot at Kent State. The fight for civil rights for blacks was ongoing, with “race riots” and bombings all over the country.

The bomber, son of civil rights activists, was inspired by the Black Panthers. He was 15, the same age as my younger brother. Ironic that the victim of his bomb was a progressive feminist and strong civil rights advocate. Mom said later that she understood his political rage.

My mom survived, because at 5’10” no vital organs were damaged, and because two of the hospital surgeons, just returned from Viet Nam, were experienced with shrapnel injuries. And because of her grit and strong will.

But after three months in the hospital her life was never the same. She now had trouble walking, chronic impairment from burned lungs, and hearing loss. She had to give up her high school teaching career, which she loved. 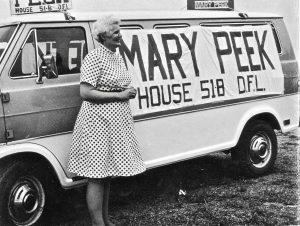 But she carried on without self-pity. She continued her wide-ranging political work–including a run for state house in 1972–and her writing (she wrote a book about her experiences in the hospital), among other things. As her injuries worsened with age, she wasn’t the grandma she wanted to be. But she was determined to make the best of each day.

What about the rest of us?

No one else was home that weekend. My oldest brother was married, living in Colorado. My younger brother and I were staying with friends, which was unusual. I was in Iowa with the soul friend I wrote about last month. Being with her saved my life. Had I been home I would have been in that rest room with Mom. 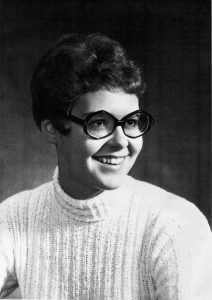 While Mom was in the hospital Dad and my brother and I carried on, going to school or work all day and visiting Mom evenings and weekends.

Two agonizing times stand out from this period. One was when I saw Mom’s deepest wounds for the first time. The other was when she became agitated, confused and paranoid and I thought my mom might forever be crazy. The doctors told us it was the cumulative effect of drugs she was given for her many surgeries and it passed in a week or two (it felt like a LONG time).

How did the bombing change us?

We now knew no one is immune to violence or accident, so we began telling each other where we were going, left phone numbers, and when we’d be back. And we did not wait to thank someone or tell them we loved them.

We saw how hard it is to have mobility issues or hearing loss. The Americans with Disabilities Act, passed twenty years after the bombing, was nevertheless a godsend in Mom’s final years.

The bombing’s long-term effects on me were subtle and emotional. Mom and I had always been close, but after the bombing she was more intensely on my emotional radar. Especially as age exacerbated her injuries and she began to tell me more about all she had to do to function every day. Those confidences were often hard to bear. And made me reluctant to complain about anything in my life unless it was BIG.

Mom’s powerful personality always cast a big shadow, but after the bombing it was even bigger. I was convinced I could never live up to her strength, courage and drive. Now, fifteen years after her death, I wonder whether we ever know what strength we hold until life demands it.

So what did it mean?  The fight for civil rights still rages. The love in my family remained. Both my mother and the bomber (in prison only three years), went on to live creative, productive lives. As did the rest of us.

Maybe there is no Grand Meaning. Maybe it is enough to tell the story. Remembering the suffering of one victim of political violence might open our hearts to other victims.

And to remember that sometimes the bravest thing to do is put one foot in front of the other each day.