I think some older, fiercer being is emerging in me. I’m not sure what She will have me do in the coming months, but I want to tell you the story in case someone like her is emerging in you too.

While She has been muttering to me for nearly a year, Her voice has most strongly come through in my intuitive art over the past few weeks.

About six weeks ago I was drawn to make a collage during my art time, something I hadn’t done for awhile.  I followed my usual process of picking images that wanted to be included, arranging them intuitively on the page, and then stepping back to see what I had created. I saw there was crankiness here, frustration at how nature and women are treated, along with a sense of power and strength residing within nature and the Feminine. I could feel and understand all of that. 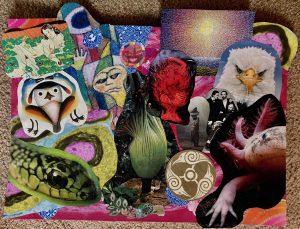 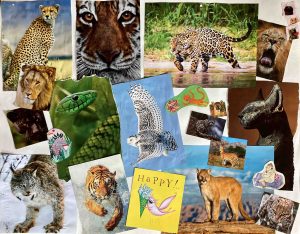 A few weeks later I was again called to make a collage, this time of various wildcats. I have always identified with wildcats and they often appear in my dreams, so it was a delight to gather their pictures. I noticed a few playful ones, but most were stern, with a definite “don’t mess with me!” vibe. Snake, owl and Egyptian cat goddess insisted on being included, too, and I realized later that I associate them with ancestral messages and spiritual knowledge from ancient times that honored life and the Feminine. This piece came together quickly, and as I worked on it I felt my deep connection with the earth and a growing strength and fierceness in my being. 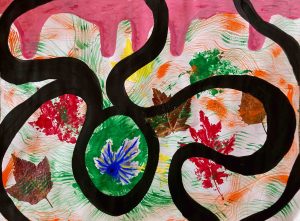 Then last week, a painting I did made me uneasy, agitated and crabby. I realized it was the pink shapes and the black lines that were bothering me, as well as the blue leaf with the black circle around it. After sitting with it, I sensed that the pink was feminine energy, which was frozen or congealed so it couldn’t flow the way it was meant to, and the black was masculine control over everything, including the natural life cycles (leaves blowing in the wind) and almost choking the blue leaf. When I asked the painting for a message, I got an angry reply: Is the life force never enough? Must it always be interfered with or controlled?” 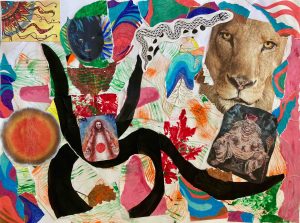 I decided this painting needed to be transformed somehow. So I randomly ripped it up, and then asked if there was a way the fragments wanted to come back together. The black pieces easily formed a body, with sturdy grounded legs, curved torso, arms stretched up. Leaves forming the spine, the blue leaf part of the head. Trying to use all the pieces I discovered this person had a tail, so I knew She needed the head of a wildcat. So I went to my stash of images for that, and for any other images that wanted to be included.  The pink became treelike on one side of the collage, and elsewhere integral to the figure’s arms and leg. Finally, I ripped up another art piece to add more color and weight in the background.

From the moment the first two black pieces came together, this collage was healing to make. The surprises that emerged were fun, of course, but in creating the collage and studying it afterwards, a surge of fierce power ran through my body. THIS wild Feminine cannot be controlled—or will not allow it any longer. She is totally sovereign, yet She is absolutely woven into the life force. She refuses to add her energy to the life-destroying, “power over” mythos of our time, but rather grounds and asserts “power within” and “power with.” She speaks Her truth and co-creates with the earth and all the forces that support life.

These collages remind me of something I wrote back in January. Inspired by the “mantra” of the powerful poet Amanda Gorman,* my own mantra came spilling from my pen:

I am the daughter of ancient ones who know how to dance between worlds. Kin to earth spirits and to women throughout millennia who have honored and defended life. They rely on me to listen and lend my voice to their wisdom. I am grateful.

I realize this knowing has settled deeper into my body with each art piece.

Though I do not yet know what more will emerge, or what that will mean.

Has someone new been emerging in you this year?

What is your mantra?

* More info on Gorman and her mantra here.

Click on any photo to see a larger and sharper version.