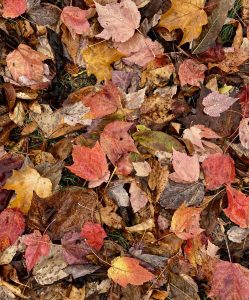 Tomorrow is November 2, the culmination of an auspicious period for honoring the dead. It is also my dad’s 101st  birthday. So I’m going to tell you a story about my dad, a kind of ghost story because it took place at his death.

On May 8, 2008 I got a call at 2 am that Dad was in the hospital. His blood pressure was dangerously low, they couldn’t raise it, and they wanted me to come. In the past year Dad had had several brief, successful hospital admissions for ongoing treatment of his congestive heart failure, but this sounded different. My brother who lives in town met me there. After an intense couple hours with the medical team it was clear Dad was slipping away. We were shocked—this felt so abrupt. We held Dad’s hands and talked to him as we tried to keep him comfortable.

My eyes never left Dad’s face. We were monitoring his comfort, but I also wanted to take him in as much as I could before he was gone.

There was a moment when Dad’s face suddenly changed: his eyebrows became long and spiky, his hair shaggy and unkempt, his eyes dark: he had a wild, untamed look that seemed beyond fear–beyond the human world even. I remember thinking, “he’s not my dad now, he’s someone else,” though I couldn’t say who. I was fascinated by this stranger, who stayed perhaps 15 seconds, and then the man in the bed was my dad again. He looked at each of us in turn, and died. 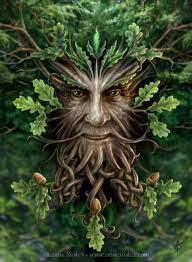 The image of this wild visitor stuck with me, but I couldn’t think about it until things calmed down after Dad’s memorial. The next time the strange vision came to mind, I heard an inner voice say, “he was the Green Man.”  I was startled. I knew that the Green Man is a legendary being, especially in the UK, usually a face made of, or surrounded by, leaves, representing rebirth and new growth in spring. He can also symbolize a masculine nature spirit or god of the wild earth. All at once I saw that a powerful thread of Dad’s life indeed held the energy of the Green Man. 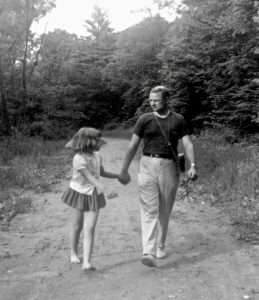 Dad and me on one of many hikes

I began to remember the many ways Dad expressed his love for the earth. How he moved his family to a house on 1 ½ acres on Grey Cloud Island, a largely rural area on the Mississippi River. How he spent years on township boards trying to protect Grey Cloud from destruction by industry. How he carefully tended our parklike land over many decades. In parts of our yard wildflowers grew freely, while in others Dad artistically planted flowers, many of them enhanced by stone walls he constructed from local limestone he foraged (a skill he likely inherited from his New England and Welsh forebears). He and I often walked the yard together in the evening, visiting flowers, bushes and trees to appreciate their growth, bloom and health.

During Dad’s vacation time we visited state and national parks, camping for weeks at a time. Weekend camping trips in local parks were common too. And every fall for decades he went on “hunting” trips with his brother and a couple friends, often on one of the Apostle Islands in Wisconsin. In the early years they brought bows and arrows (later just cameras), but hunting deer was less important than being in the woods together with his buddies. 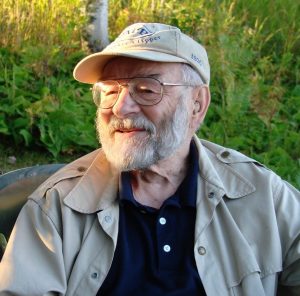 The Yankee Clipper in his cap

When Mom and Dad stayed in their Tiny House on my brother’s Lake Superior land, Dad tended that sanctuary too. He grew flowers around their cabin, pruned trees and bushes, and generally looked after the area. He spent so much time with a clipper in his hand that one year we kids gave him a cap embroidered with his initials and the nickname “Yankee Clipper.”  We joked about his clipping, but when it lapsed after his death we saw how much his pruning had nurtured the landscape.

As I recalled these memories of Dad’s deep connection with nature, I saw too that despite his quiet, intellectual exterior, there was a feral quality to my dad, a grounded fierceness and inviolability. And I wondered, constrained by the times Dad lived and his roles as psychologist, community volunteer, husband and father, how much of his Green Man energy could not be expressed. 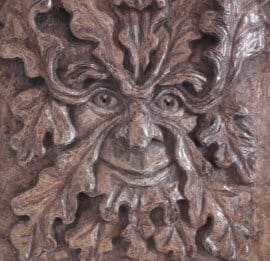 In a flash my grief over losing Dad so abruptly was tempered with joy and awe. I felt blessed by that glimpse of the Green Man, and by my now deeper understanding of my dad. Awed as if I had spotted a bobcat or a white stag in the woods. And joyful because it seemed to me that in those moments Dad and the Green Man were fully reunited, and the two of them passed into the Otherworld together.

(Click on any photo for a larger, sharper view.)