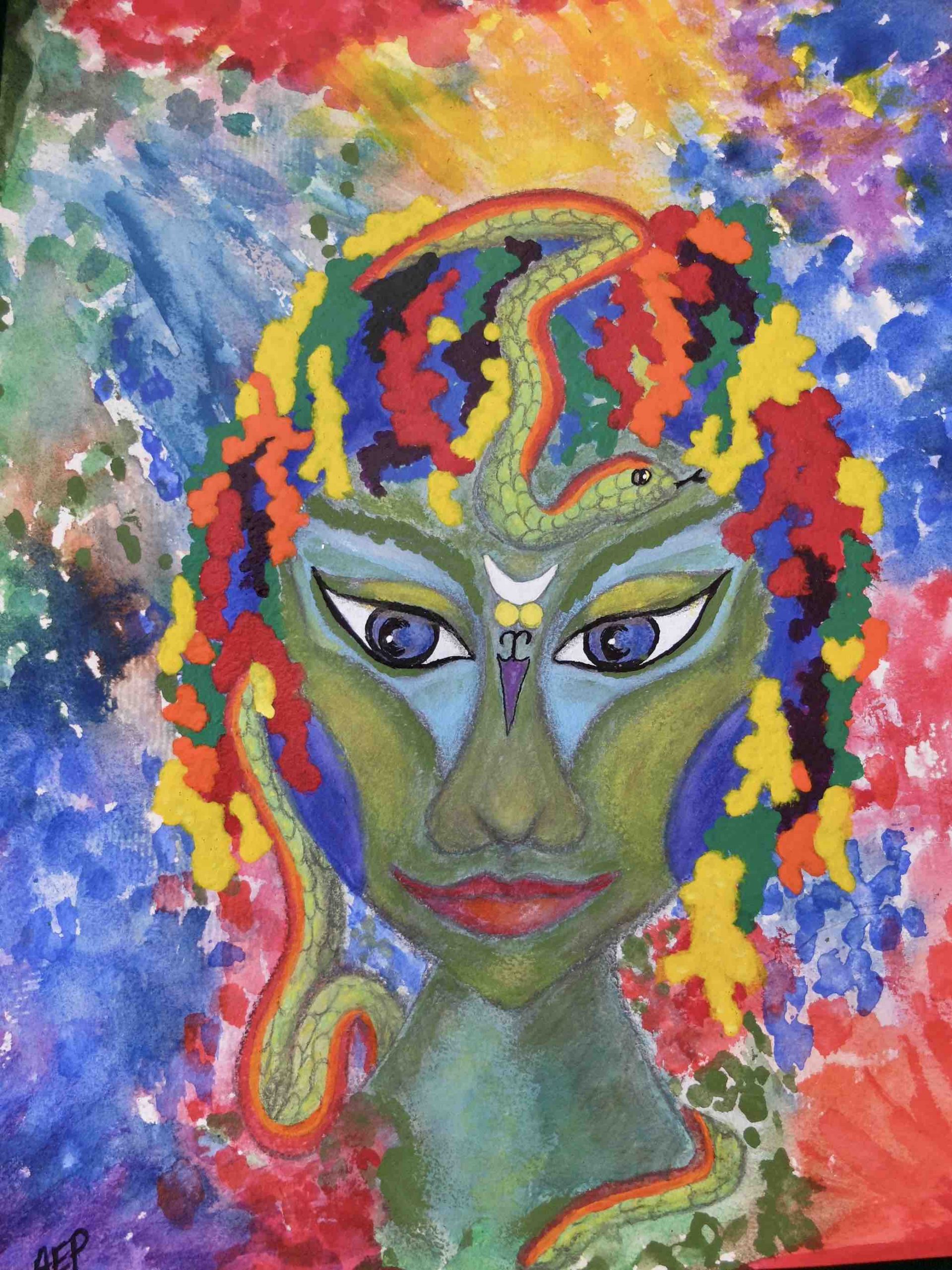 Snakes appear often in my art, and have for years.

Snake also emerged as my animal/symbol for 2022.

Is there a message here?

Over millennia, earth-honoring cultures around the globe have carved snakes on rock art and painted them on pottery. Because of their ability to shed their skin, snakes can be powerful symbols of transformation and the flow of life. And because the Bible associates snakes and women with evil, painting snakes can also be feminine rebellion.

I resonate with all these ideas, but intuitive art does not arise from ideas, at least not in a conscious way.  Is something in my past triggering the unconscious calling up of  these images?

As a kid I lived near woods and fields. Though outdoorsy, I wasn’t a big fan of snakes, sharing the general fear common to many of us.

I remember only three incidents in my life involving snakes.

The first, at 10 years old. One day, when my little brother and I waited for the school bus with the neighbors we noticed a dark snake, about 4 feet long, lying dead at the side of the road. Declaring it was a bull snake, the boys dared me to take it to school. Refusing to be patronized, I told them I would, if they would put it in a bag to carry (I didn’t want to touch it).  I remember sitting on the bus, feeling a little smug.  I wanted to surprise and fluster my teacher—the first male I’d had, and a teacher I didn’t really like or respect.

When I told him I had brought a bull snake to class, I was gratified to see my teacher’s eyes widen. A bull snake!?  I assured him it was dead.  He relaxed, and with a bit of malice in his eye (I thought), suggested I take it out of the bag and walk it around to show everyone. Yikes! I didn’t expect that!  So to save face I reached in, pushed away my disgust at having to touch it, and walked that snake around the room, taking the opportunity to inspect it more closely.  Afterwards I felt a thrilling bravery and strength. 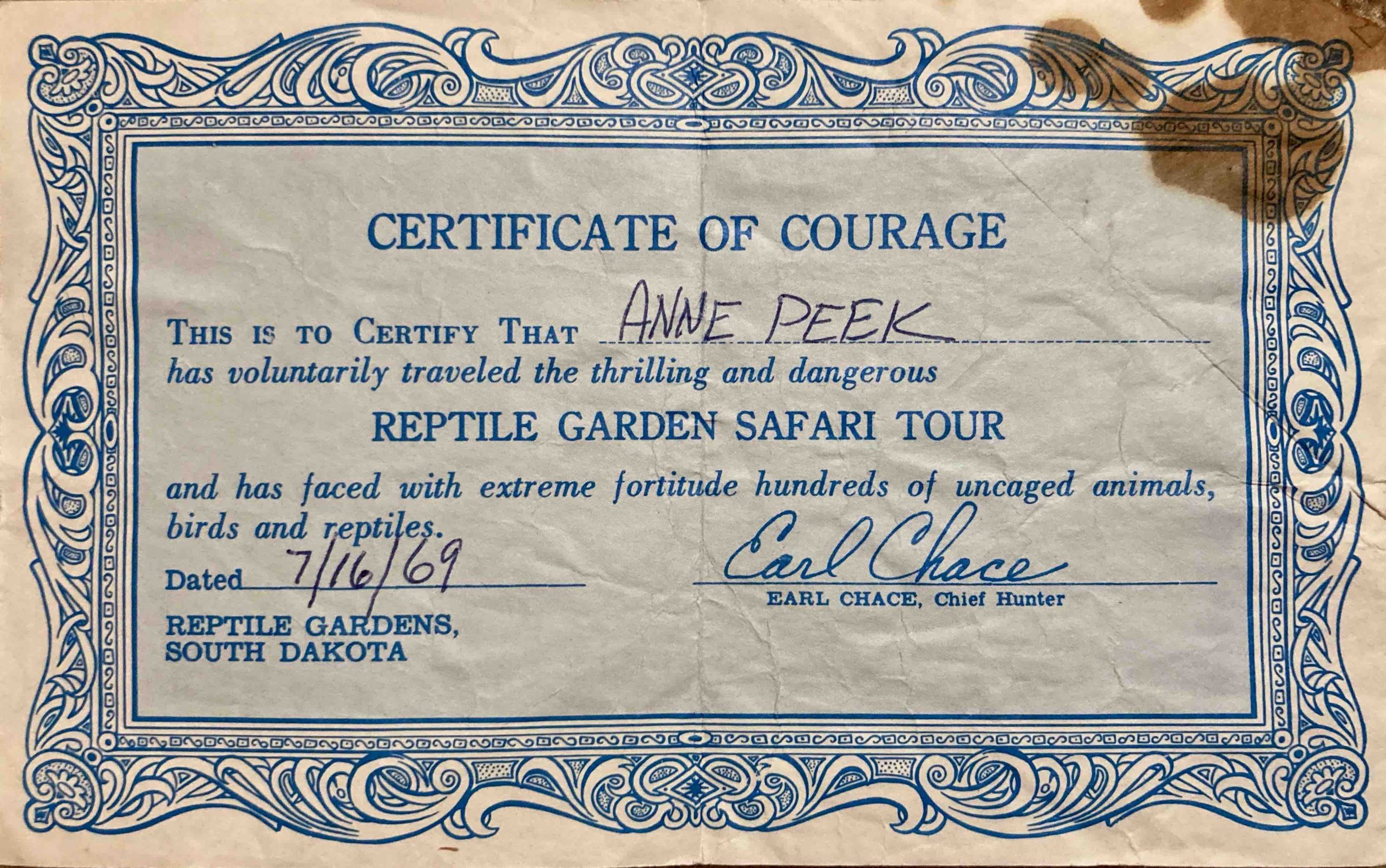 The second, at 15 years old. During a camping trip in the Rockies my family visited the Reptile Gardens in the Black Hills. Again swallowing my fear to save face, I completed the  “safari” walk through a lush area packed with snakes, among other creatures, roaming free. I received a Certificate of Courage” for doing so, which I saved for more than 50 years!

The third, in my late 40’s. In the early 2000’s I was at a retreat in Massachusetts with fifteen other women as part of my training in Sacred Circlework. One day, while we all sat in a circle on the floor, our inn host stepped into the circle, an 8 foot boa constrictor curling around her body.  Our teacher told us that the boa, Satya, was a healer and that she would not hurt us (though we should avoid letting her circle our necks!).  I watched with awe and dread as the snake twined around the host’s body. Then she set the snake on the floor in the center of the circle. I prayed to become invisible. 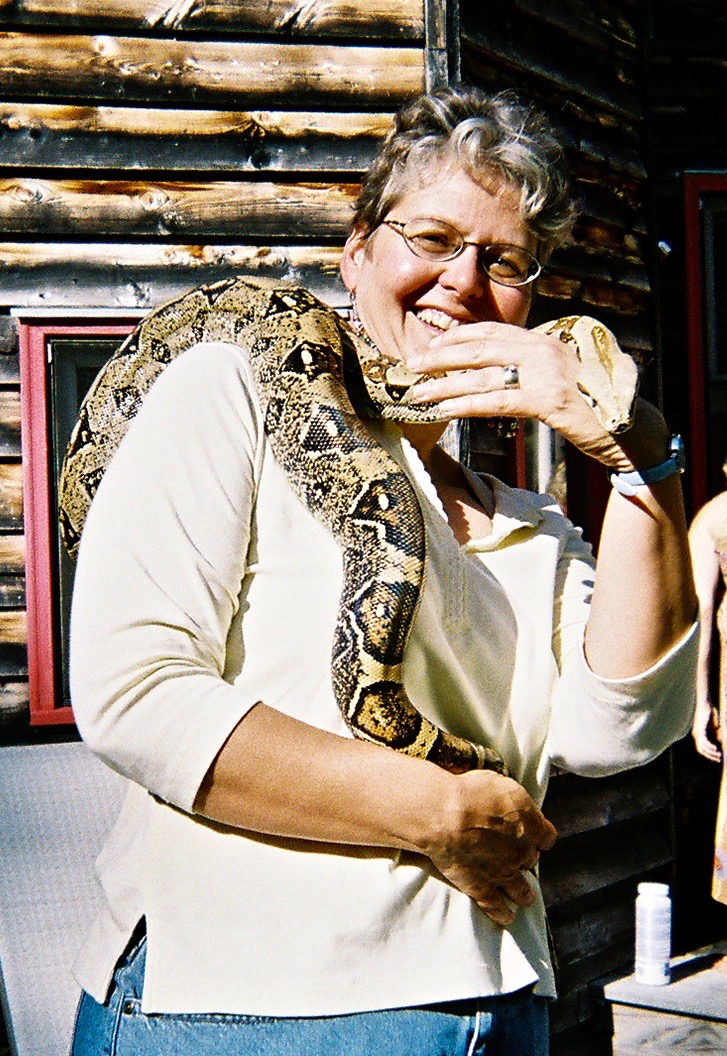 I sensed powerful calm and dignity in Satya, but I was skeptical of the claim that she was a “healer.”  Until I witnessed it.  Satya headed straight for one of us who was struggling emotionally that day, crawled onto her body, and both became motionless, clearly going into a trance. I think we were all amazed and soothed by what we saw and sensed.  After perhaps 10 minutes the spell broke. The woman, exuding peacefulness, smiled broadly and Satya moved back towards the center of the circle.

I was still wary, when I heard a clear command in my head: go to the snake! Go to her, not away!  Before I could do anything Satya crawled right to me. With trepidation I let her move up my arm.  When our teacher suggested I stand up to give the snake more space I did so, and at that point I let go and sank into the experience. My fear dissipated. While Satya roamed I studied and admired her subtle coloring and curiously ran my fingers over her dry, scaly skin. I was struck by how heavy she was, and by how the entire length of her body felt like one powerful muscle. I marveled at how every inch of her was alive—no “dead” spaces.

I felt blessed by Satya’s visit, blissfully connected with her. Exhilarated, I was reluctant to let her go. The few times we returned to that retreat center I made a point of visiting with Satya, and once I was able to hold her again.

Yet the last of these incidents was 20 years ago. 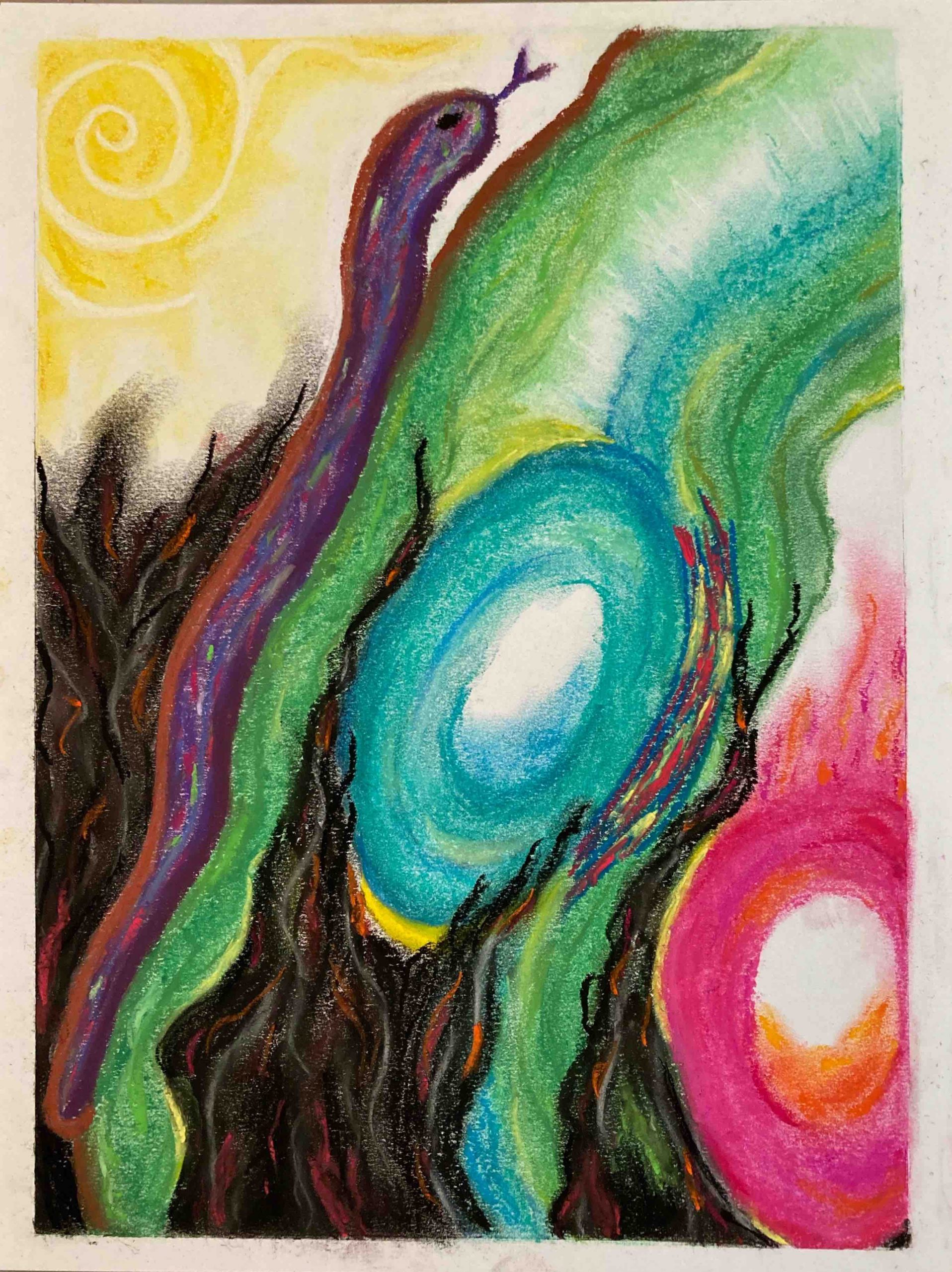 When snakes first showed up in my art I was startled and a bit uneasy.  Even now, while they don’t surprise me, painting, drawing or sculpting snakes brings a flicker of apprehension, as well as a sense of supple strength, ancient power, and groundedness. Maybe they come to viscerally deepen those qualities within me?

Or are they here to support recent personal transformations? Or stimulate ones to come?

Or maybe snakes, like crones and witches and other ancestral beings, refuse any longer to hide in the shadows. Visiting those of us who resonate with them so we can make them more visible?

Oh—I just remembered: In Chinese astrology I was born in the Year of the Snake, the Water Snake. So maybe snakes are just part of my unique creative expression.

Who knows? I guess I’ll just keep trusting whatever shows up on the canvas.

What is your relationship, if any, with snakes?

(Click on any photo for a larger, clearer view.)

(If you are reading this in an email and the formatting is odd, you can read the original on my website.)