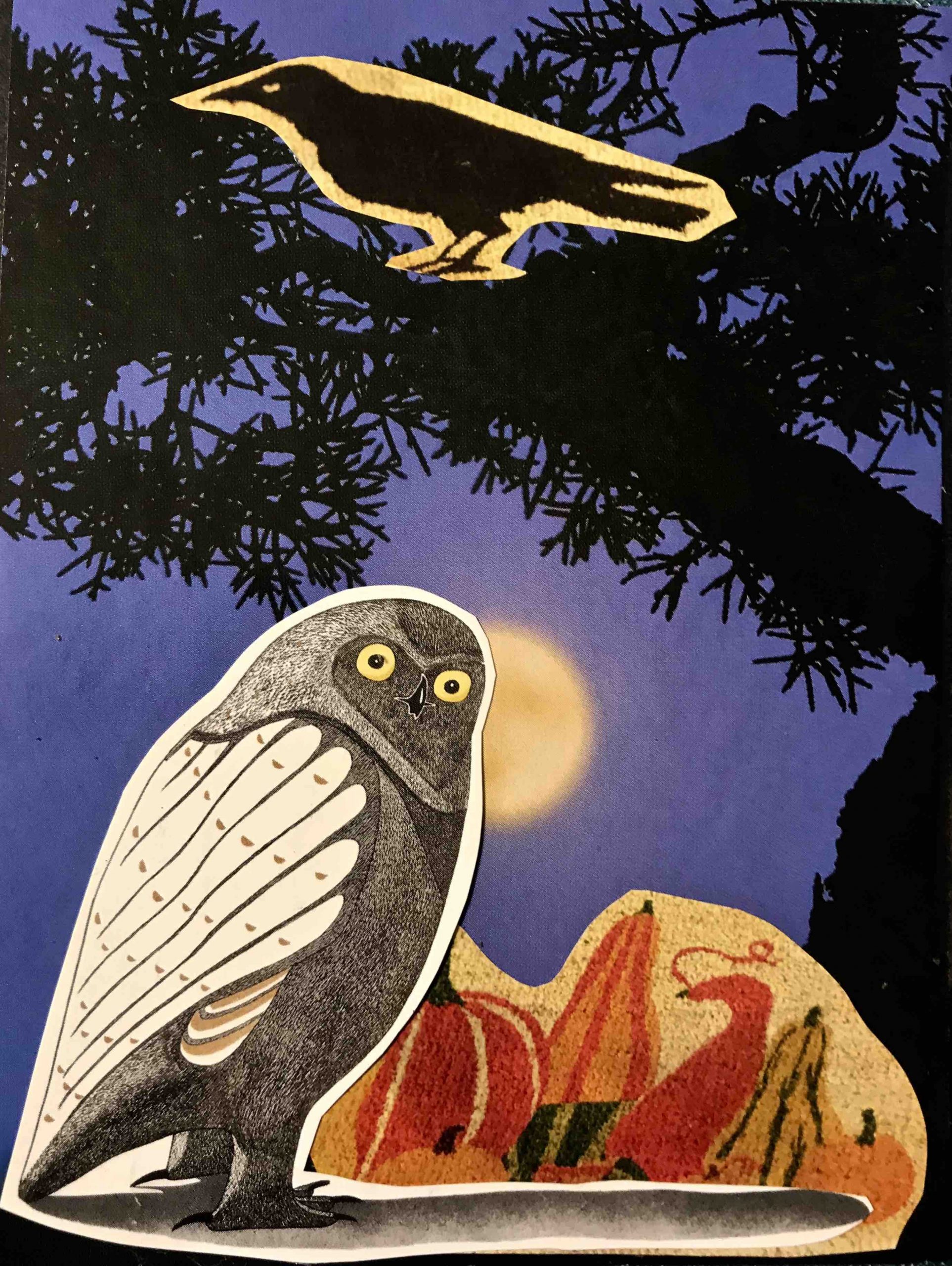 I hung up the phone one October day in 1976 feeling both dubious and intrigued.  Flattered to be asked, I had agreed to tell fortunes at my brother’s Halloween party since I loved Halloween almost as much as I loved him.  But sometimes Tom’s idea of fun and my own were not the same.  I was 23, a student at the University of Minnesota Law School.  Tom, two years younger, also studied at the U.

I went over the conversation again in my mind.

“I want a fortune teller at the party and you’re perfect ‘cuz nobody knows you. And you dress up as some kind of witchy fortuneteller almost every Halloween!”

“But how am I s’posed to tell fortunes?”

Tom chuckled.  “I’ll give you my old Tarot deck as a prop, and I’ll write down stuff about everyone who’s coming on note cards. You can make up their fortunes with the info I give you.”

“Your Tarot deck is missing some cards!”

“That doesn’t matter—you don’t know how to read them anyway!  So will you do it or not?  C’mon, it’ll be fun!” 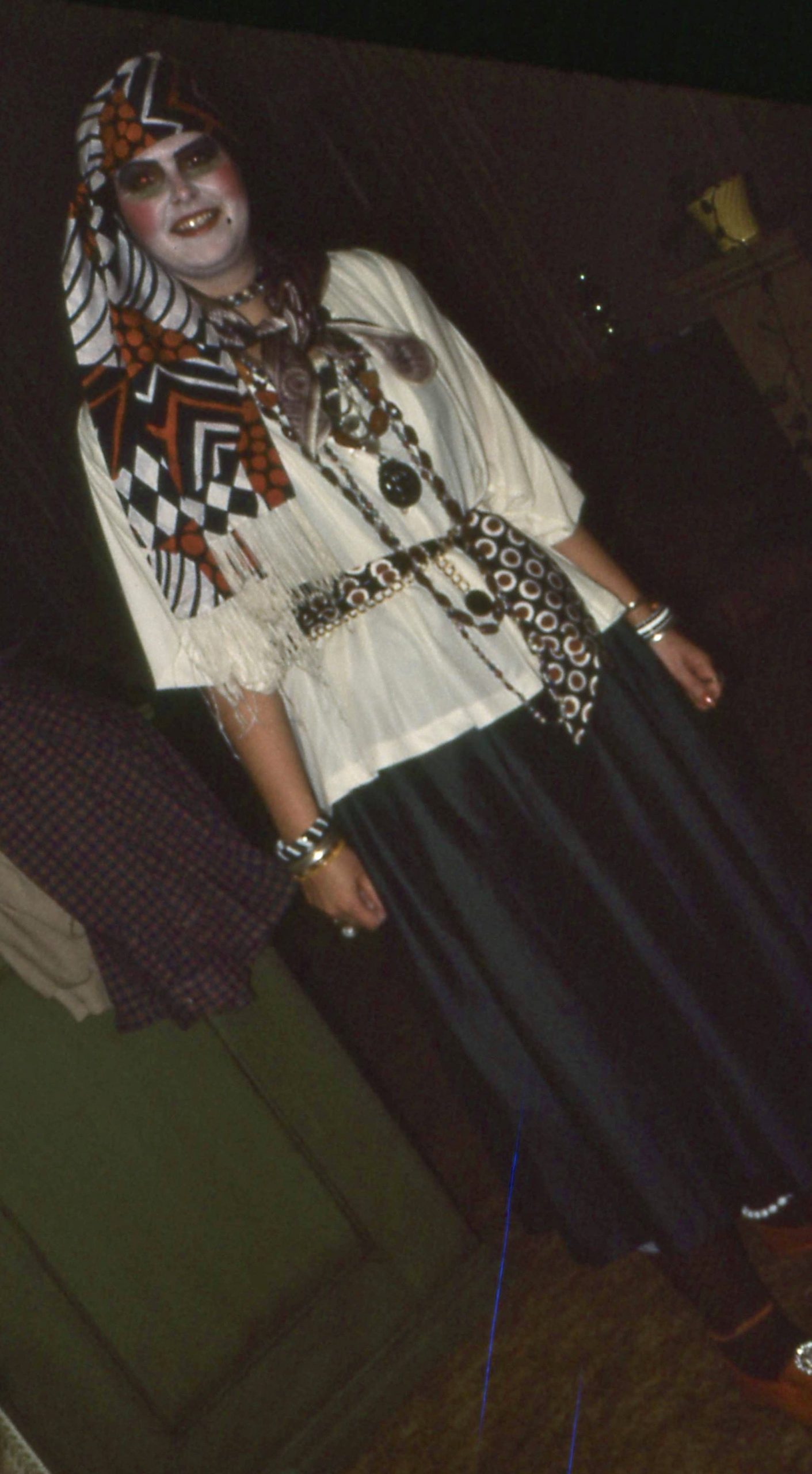 The night of the party I had fun putting together my costume and I looked good: long slim black dress from the 1930’s, adorned with lots of gaudy jewelry and a multicolored shawl.  I wrapped my head in bright silk scarves, painted my lips and nails crimson, and loaded my hands with rings.

And Tom must have enjoyed creating my little cozy nook in the bedroom in his apartment.  He had hung a dark bedspread from floor to ceiling, creating a murky, atmospheric tent just large enough for me on one chair, the guest on another, and a small table between us. On the table, covered with a red Indian bedspread, sat a large, red, well-used pillar candle and the Tarot cards. The room smelled sweetly of incense.

As I settled in, Tom handed over the note cards he had prepared, then dashed off to greet his guests.

Just as I was beginning to get nervous about the fortunetelling, I heard Tom call out, “Madame Zelda, here is Sarah to discover her fortune!”  While Sarah strolled down the hallway to my chamber, I quickly pulled her note card from the pile and scanned it as well as I could by candlelight. She sat down in the chair across from me. On impulse (and perhaps to stall for time) I asked to see her palm, ran my fingers over it, looked directly into her eyes and asked whether she “believed in all this.”  She mumbled something noncommittal. Then I carefully laid out six Tarot cards, as if I knew what I was doing.  Using what I remembered from Tom’s note card but referring to the images on the tarot cards, I told her about her life. Delighted, she asked questions, to which I improvised answers that seemed to satisfy her. She left impressed and happy. I felt uncomfortable and unsatisfied.

But then a fortuitous disaster struck. After another uncomfortable (to me) session like the first one, Tom rushed in to tell me that many of the friends he had note cards for had not shown up, and guests who had come had brought friends that Tom did not know. In other words, I was on my own.

I was surprisingly calm about this, and in any case, had no time to worry before another guest showed up wanting her fortune told. I focused my attention on this new person.  Because it seemed “right” I followed the same procedure as in my previous sessions: scanning and touching her palm, asking about her belief in psychic ability, and laying out six Tarot cards.  I knew nothing about this person or about reading Tarot cards, but when I glanced at the pictures on the cards, words about her life came out of my mouth, words that the shock on her face suggested were accurate.  And somehow I was able to answer her questions in a way that seemed to help her.  She went away amazed.

I had no time to reflect on the experience before someone else—another stranger—strode in to hear his fortune.  This time I didn’t need to validate what I told him by watching his face; I knew somehow my words were helpful.  I didn’t know how I knew, I just did. The visitor and I seemed far removed from the Halloween party, together inside our den, a warm, nurturing womb where information flowed freely. 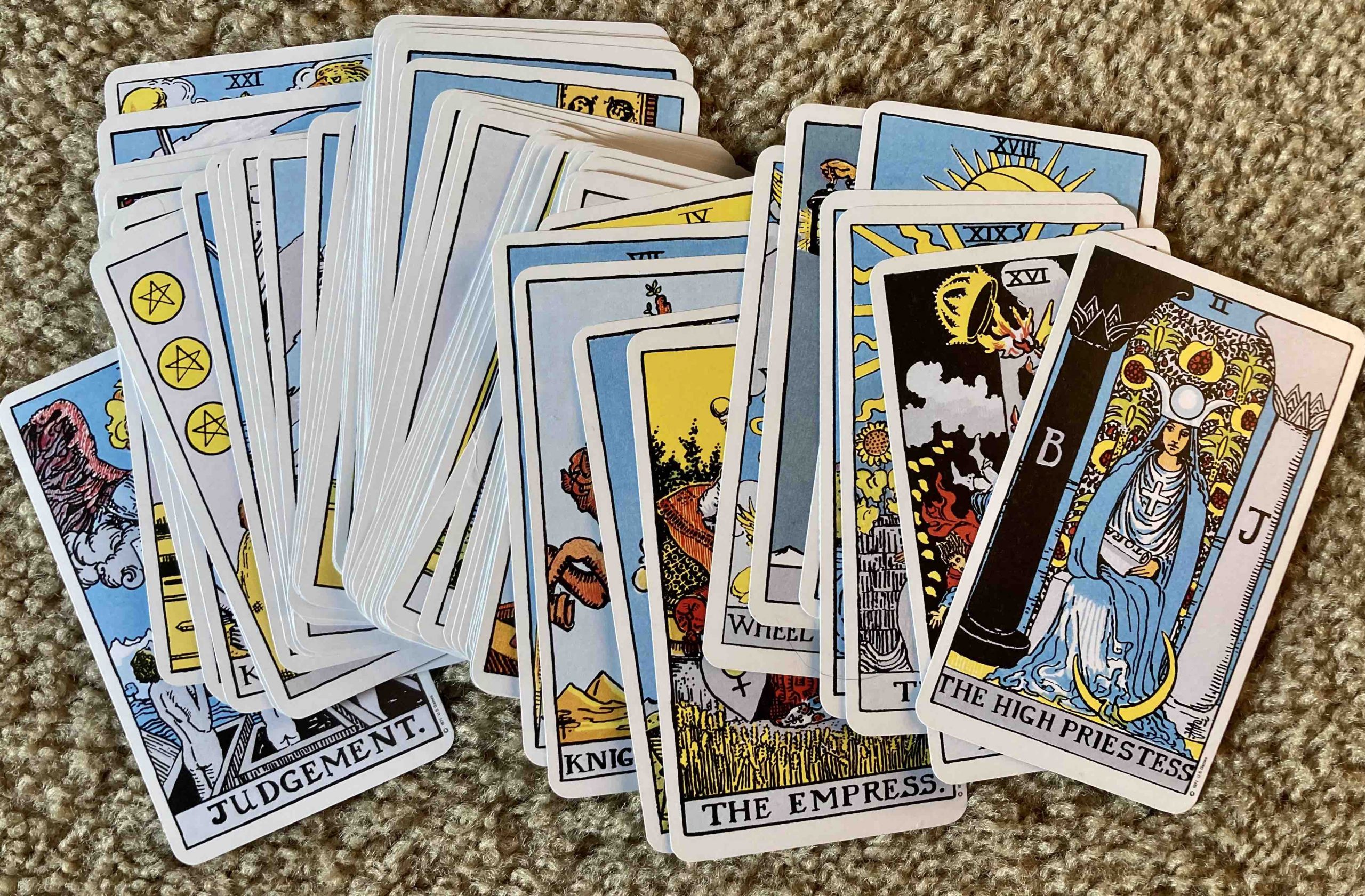 My reputation at the party grew. A steady stream of guests came and went. Totally focused on each person who came, I was able to sense that person’s special concerns and discuss how to deal with them. When word got back to me that guests waiting their turn complained I was taking too long, I realized with a start that what I imagined were five- or ten-minute readings were actually twenty minutes or more. Time was suspended for me in my tent.

When the party was over the thrill I had suppressed so I could concentrate on my fortunetelling now rushed through me.  I was exhilarated, yet quiet. I was pleased I had contributed to Tom’s party’s success and had been helpful to his friends.  But what astounded me was that I knew “I” had not told fortunes or given advice; I had somehow effortlessly dipped into a River of Knowledge that I could not name.  I was awed by the discovery of that River, paradoxically pleased with myself and humbled by being able to tap into it that night.

I did have one “failure,” though.  My final visitor, pressured to come to my chamber by the enthusiasm of the others, clearly did not want to be there.  Or maybe he set out to test me.  I followed the process I used all night, but I could tell him nothing.  No matter how I tried to draw him out, he asked no questions and I could sense no images or words to illuminate his life.  Several minutes into the session I saw him in my mind’s eye sitting in a large box, tightly sealed at every corner.  So I ended the session.  Apparently the ability to wade into the River of Knowledge could be blocked by someone determined not to reveal himself.  I found this experience just as fascinating as my earlier “successes.” 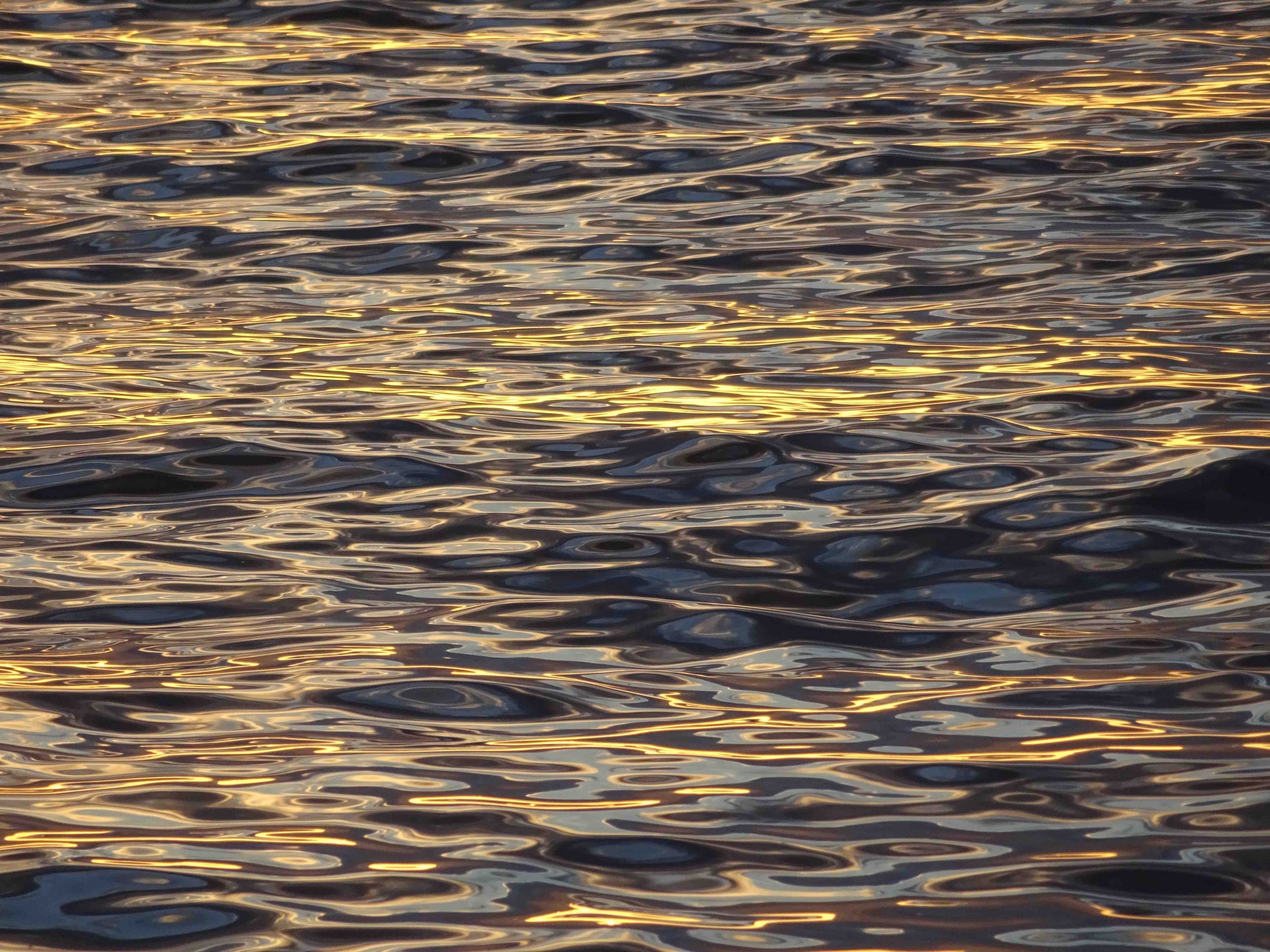 I told almost no one about what happened that Halloween, afraid they would either make too much of it or dismiss it as nutty.  For twenty years I held the adventure to my heart like a secret treasure, occasionally bringing it out to savor privately.  Alas, I trusted neither myself nor the River enough to dare to repeat it, lest I be disappointed.

Yet the fire of that experience smoldered within, leading me  nearly twenty years later to train in psychic development, and later still begin serious study of tarot.

Now, 46 years after that Halloween, I am still awed by that River. And by the knowledge that It flows alongside us all the time, providing intuitive insight, creative ideas, and spiritual assistance whenever we are open and humble enough to ask and receive.